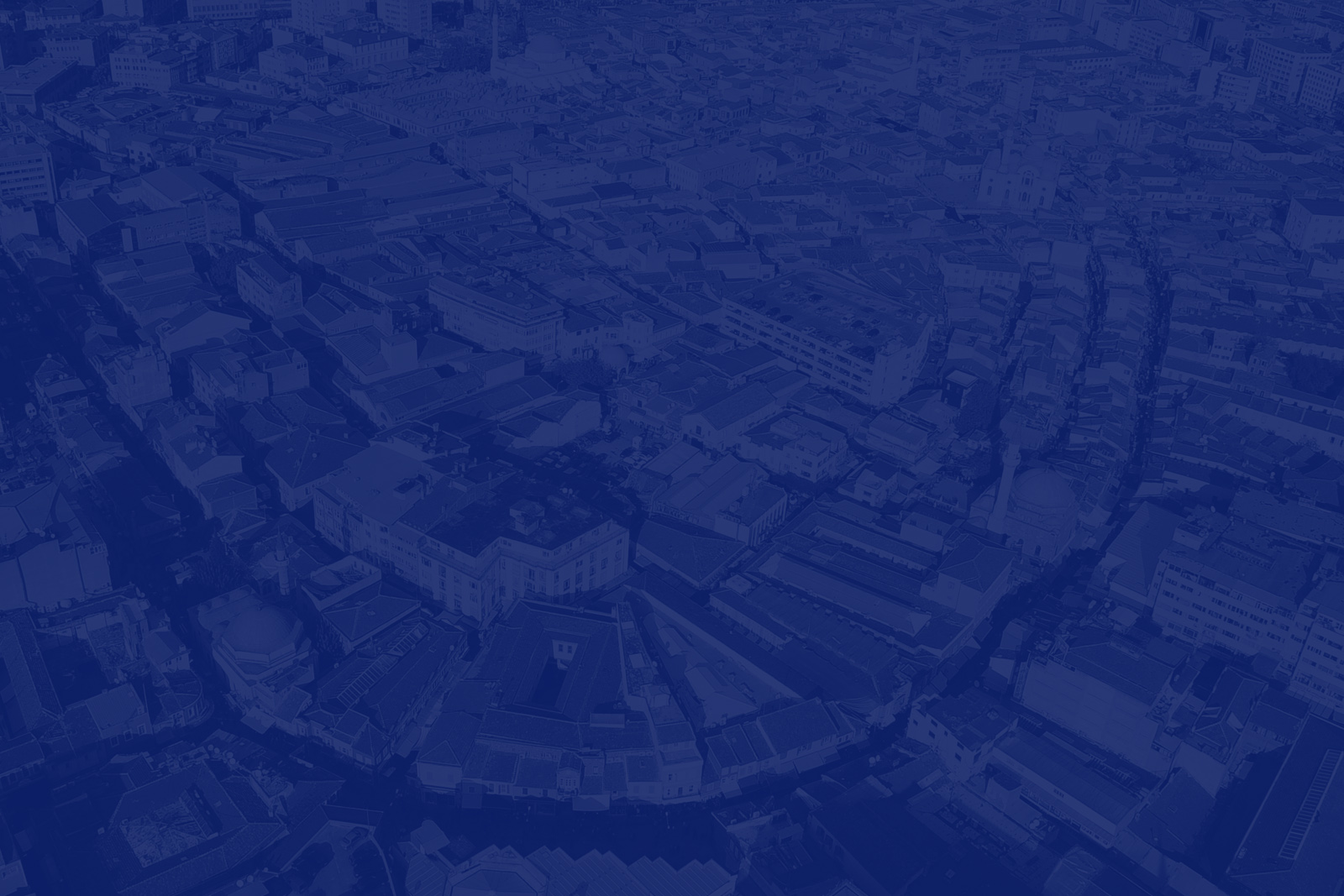 Izmir has a unique geography with its rich historical cultural heritage and natural beauties.
İzmir has been home to different civilizations since its inception, and as a result of the blending of all these layers, a mosaic of rare cultures has been developed.
Settlement dates back to the 7th millennium BC. The city, which was built on the Kemeraltı axis immediately after the Eastern Expedition of Alexander the Great, grew and developed around the centre for about 2300 years. The region is a multi-layered open-air museum with neighbourhoods that include examples of religious, public and civil architecture belonging to various cultures, such as Kadifekale Agora, the Ancient Theatre, the Ancient Stadium, the ancient harbour. 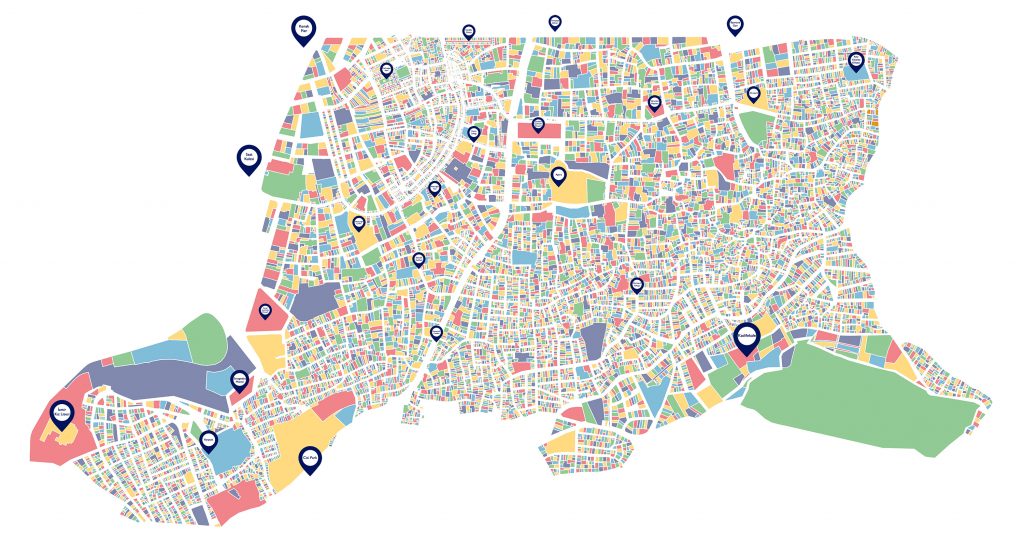 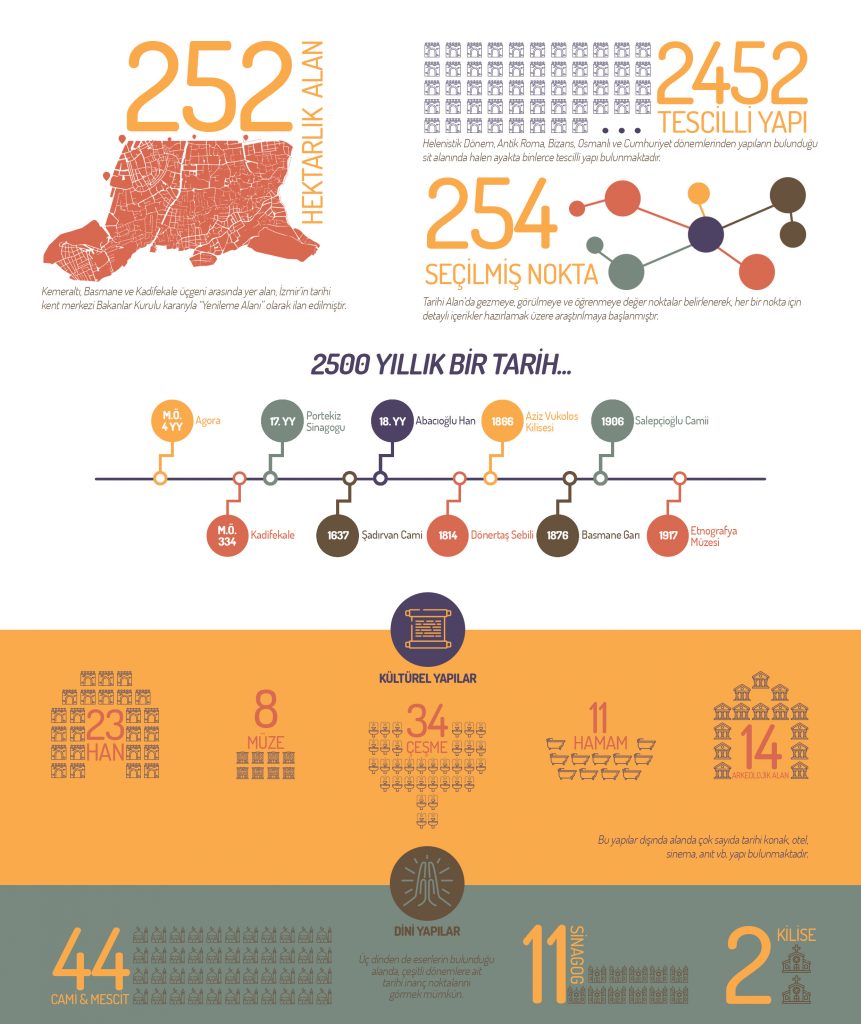 The intersection process of different ethnic groups starts in the 17th century when the commercial identity reached its highest level and reached its peak in the 19th century. As a result of differentiating commercial and political structure in this process, İzmir has taken important migrations on a world scale and has developed a multilingual, multicultural, urban identity and has become one of the most important commercial centres of the Mediterranean region.
After the 1922 fire, modern Izmir was developed in line with the objectives of the Republican regime. İzmir International Fair was built in the area destroyed in the fire in 1936 after the realization of the 1st Economy Congress.

The Kemeraltı Bazaar, which developed between the 15th and 18th centuries with the filling of the ancient inner harbor, continues to be a commercial centre.
With the establishment of the Cultural Heritage in 2002 within the scope of İzmir Metropolitan Municipality, many important projects have been implemented in line with the responsibility of preserving the historical and cultural heritage within the limits of responsibility.

The area, which is about 252 hectares, has been declared as’ Kemeraltı and Environment Renovation Area’ in 2007 with the decision of the Council of Ministers in accordance with the law numbered 5366 with the initiatives of our Municipality.
Many of the projects are shaped with an understanding of embracing all civilizations and socialist local government.

Konak is an area where archaeological sites and historical building stocks are kept. Within this area, the city’s business centre shifts to the north and the centre is discharged, the growth dynamics of the area is eliminated, and the population decrease, the dwelling in the use of housing and the destruction of the historical fabric in case of neglect are increasing day by day.
These depressions should be explained prior to leaving the rehabilitation open for a clear holistic organization. In this context, the Metropolitan Municipality of Izmir continues to give life to the field with the expropriation works in archaeological areas and conservation management projects in which it continues on a single building scale. In addition to all these works, Izmir History Project was launched to integrate and revitalize the area.
The first objective is to strengthen the relationship between the people of İzmir and history. This will be done through the development of memory associated with the cities of Izmir. The resource to be utilized for this purpose is archaeological cultural assets and historical building stock in the project area.
The second aim is to prevent the collapse in the project areas. The project area contains a large number of cultural assets. It should be ensured that the resurrection goal is carried out in accordance with the sustainable approaches in terms of archaeological heritage, historical building stock, cultural diversity and social structure.

There Is History In It!

Prestigious activities will increase the potential of visiting the region. It is important to develop tourism not only by observing historical values but also by making history a part of life experience here.
The withdrawal of youth into this area in the context of higher education activities and their accommodation activities has been determined as another strategic orientation. In this regard, suggestions have been developed to increase the diversity of activities that young people can benefit from.
The fourth strategic preference is the rehabilitation and revitalization of housing functions in a large proportion of residential areas. It has been proposed to obtain a balanced social structure by making the residents from all layers of society to live in this area.

The Historical Area Reaches its Real Identity with 19 Sub Zones

The withdrawal of youth into this area in the context of higher education activities and their accommodation activities has been determined as another strategic orientation. In this regard, suggestions have been developed to increase the diversity of activities that young people can benefit from in their leisure time, to create cultural areas integrated with production and sales activities for young people, and to develop projects to increase the skills and potential of unemployed or working young people who are out of the education system.
The fourth strategic preference, which has been agreed upon in the participatory process, has been the rehabilitation and revitalization of housing functions in a large proportion of residential areas. It has been proposed to obtain a balanced social structure by making the residents from all layers of society live in this area.

Today thousands of registered cultural buildings and hundreds of unique tastes are waiting for their new guests in Kemeralti.